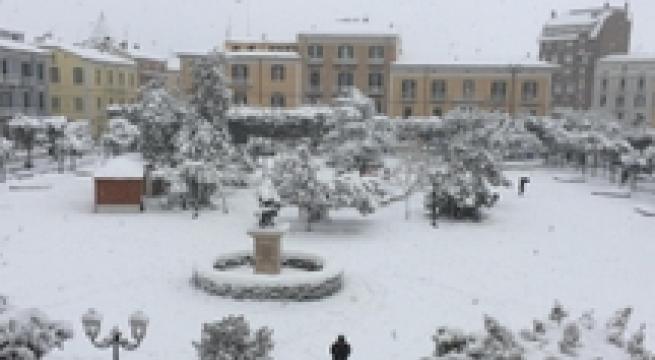 Rome, January 18 - Some of Italy's central and southern regions were reeling Monday after the weekend brought snowstorms, ice and plunging temperatures at the weekend. Schools were also shut down in the Abruzzo capital of Pescara after 30 municipalities told students to stay home as the region battles heavy snowfall. In Campania, heavy snow caused schools to be shut down in Salerno province and fire fighters rescued motorists in the Irpinia mountain region. The southern Molise region continued in emergency mode after 12 earthquake tremors overnight, snow, ice, and subzero temperatures. Schools in 80 out of the region's 136 municipalities were shut down as snowplows went into action throughout Molise. Temperatures dropped to -5 Celsius in the regional capital of Campobasso, which has gotten 50 centimetres of snow, and to -10 C in the town of Capracotta, located at altitude of 1,421 metres (4,662 feet). Further south, snow and 50-kilometer winds blowing from the northwest made connections difficult between the mainland and the seven Aeolian Islands in the Tyrrhenian Sea north of Sicily. Ferry service from the Sicilian coast town of Milazzo is still cut off, leaving 400 Aeolians stranded. A 35-year-old woman who went into labor on Lipari island had to taken to Milazzo hospital by helicopter on the night between Saturday and Sunday, local sources said.