Discovered in church on Aventine Hill 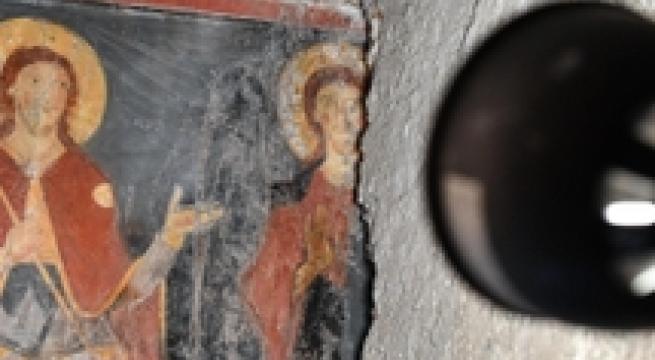 Rome, July 1 - The fresco shows a large purple mantle over the skimpy clothes of the pilgrim, a hand raised almost as if to introduce the majesty of Christ, who is blessing the believers next to him. Hidden by a wall for almost 900 years, the medieval fresco was found in an interspace of the Sant'Alessio church on the Aventine hill and in a surprisingly good state of conservation with luminescent colours. "This is absolutely an exceptional find," ANSA was told in an exclusive interview with the woman who made the discovery, the art historian Claudia Viggiani. "Especially for the very rare iconography, which shows two figures that can be recognised in the part of the painting at the moment visible, most likely Saint Alexis and Christ the Pilgrim." The discovery, which ANSA was able to document with photos and video, is the result of years-long research and has something of a detective story behind it. "Everything began during research into archives," Viggiani said, who alternates working as a researcher and as a cultural consultant for mayors and ministries. Sparking her curiosity was a letter written in 1965 superintendent's office for Lazio monuments, in which mention is made of "a fresco in excellent condition" found by chance during the works for the consolidation of a bellower. But which church, she asked herself. The document, Viggiani said, did not give the name. Faced with that marvel of colours, the unknown official in the 1960s seems to have closed the door and left the painting to its centuries-long oblivion. "It took a while but in the end I found it," the scholar smiled. Determination was decisive in this case. A few months ago the work was secured by restorer Susanna Sarmati with a project implemented thanks to the Rome special superintendent's office under Francesco Prosperetti with Mariella Nuzzo and Carlo Testa. The small door behind Sant'Alessio that hides the interspace is however inaccessible for security reasons. However, crossing through the door with the permission of Don Bruno, the parson of Sant'Alessio, one meets with an explosion of color, an intense black background and the cinnabar of the mantle. There is also the penetrating gaze of Christ and the priestly serenity of the saint imitating him and resembling him a bit, as if he wanted to present himself as a 'human' copy of the Messiah. Dating back to the mid-12th century, the painting has a polychrome frame that restorer Sarmati said was of "exceptional sophistication" and that it is difficult to "find ones that are so complete". She pointed at the original brushstrokes on the wall, which can still be distinguished. Though other medieval frescoes exist in Rome, "their state of conservation despite restoration, is mediocre. This one, however," she said, "which was never touched is almost perfect." In the original church, Viggiani said, the painting was in an important position due in part to the fame that St Alexis had in that period. It was precisely for the devotional respect for the saint that was said to have been the son of Roman senator Euphemian and who in some way seems to have been the connection between pagan Rome and medieval Rome that is thought to be the reason for the incredible state of conservation. "Whoever renovated the church in the centuries that followed, walling in the counter-facade was careful to protect the fresco," she said. A small part of it with St Alexis's face was probably left visible to churchgoers through a small crack open in the inside of the nave. The painting now measures 90 centimeters long by over 4 high and another section that is at least as large is still hidden by the wall. Viggiani is determined to bring it, too, to light. "We owe this to the Romans," she said, "and there are more surprises awaiting us."