12 mn for public transport, polluting cars to be scrapped 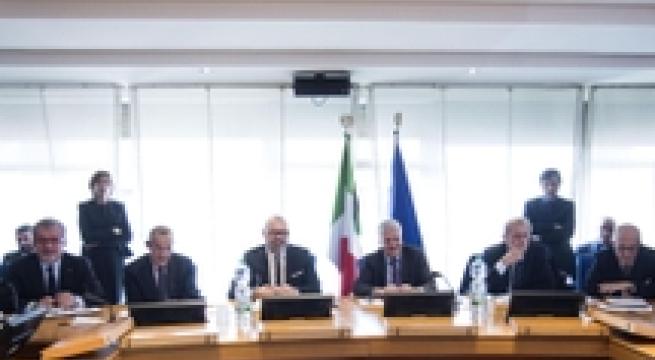 Rome, December 30 - A summit between Environment Minister Gian Luca Galletti and Italy's governors and big-city mayors on Wednesday produced an unprecedented three-year plan to cut dangerously high levels of smog in the country's largest cities. Among the measures approved were: a 12-million spending plan to revamp public transport with more, and greener, buses, trams and trains; measures to help people scrap Italy's most polluting vehicles; reducing heating in buildings by two degrees Centigrade; and cutting urban speed limits by 20 km/h. The summit framed a national three-year "strategic" plan to combat smog. Among the measures is an environmental coordinating committee and a task force made up of big-city mayors and regional governors. "This is a great alliance and a great success thanks to regions, cities, and the ministry," Galletti said. The environment ministry proposed setting up the 12-million-euro fund for cities to spend on public transport and car-sharing. The money would be available immediately, the ministry said. Galletti proposed new smog-busting rules for urban areas, in cases when smog levels rise above safety limits for more than seven consecutive days. As well as lowering home heating by two degrees and cutting the speed limit by 20kms/hr, these moves would include issuing public-transport discounts. "In my opinion cities must (implement these rules), but it's up to mayors to decide," Galletti said. The minister said the measures would "put an end to the (current) babel of anti-smog measures". Turin Mayor Piero Fassino, the head of the National Association of Municipalities (ANCI), said the decisions mean "we're going from local interventions to a national strategy...for the first time". Emilia Romagna Governor Stefano Bonaccini said Italy should set up "an extraordinary fund for everything needed to scrap the most polluting cars". Bonaccini, who heads Italy's 20 regions in their dealings with central government, said replacing cars was "important to cut emissions". The summit's moves were generally welcomed but Lombardy Governor Roberto Maroni said "three zeros more are needed, two billion euros". The smog emergency continued Wednesday despite car bans in Rome, Milan and other cities. Particulate Matter 10 (PM10) readings in both Rome and Milan continued well above the legal limit of 50 micrograms per cubic metre in spite of the fact that most private vehicles were banned Tuesday. Milan was over the daily limit for the 100th time this year Premier Matteo Renzi said at a year-end press conference Tuesday that more can be done to combat smog and his government plans to increase electric car recharging posts from 2,000 to 20,000 over the next two years and to make council housing more energy-efficient. The World Health Organization (WHO) designates airborne particulates a Group 1 carcinogen. Particulates are the deadliest form of air pollution due to their ability to penetrate deep into the lungs and the blood stream, causing DNA damage, heart attacks, and respiratory illnesses. According to the CNR research agency, respiratory diseases in Italy doubled in the 26 years between 1985 and 2011. The smog emergency is expected to ease, however, with the arrival of rain and wind after the start of the new year, especially in the country's central and southern areas, said meteorologist Edoardo Ferrara. In the northern Po Valley and the Lombardy region, the situation is also expected to improve slightly, but still remain negative. Stagnant pollution has lingered long enough that by now in order to fully "clean" the air, a strong storm front is needed, which Ferrara said won't arrive right away. The Legambiente environmental group demonstrated outside the environment ministry in a flash mob, pushing 10 proposals to help solve the smog emergency. The ten proposals for better air quality and quality of life were: 1) 10,000 new commuter trains 2) 100 new cycle paths in cities 3) turning private cars into the last option for moving around cities 4) reducing road speed to 30 km/h 5) stopping subsidies for cars to improve local public transport 6) the extension of Milan's C area, which charges more for cars, to all major cities 7) restricting the urban use of the most polluting vehicles 8) a ban on the use of fossil fuels, including methane, to heat buildings 9) reducing industrial pollution 10) new controls on actual emissions of vehicles.