>>>ANSA/ Disaster near miss as Rome building caves in 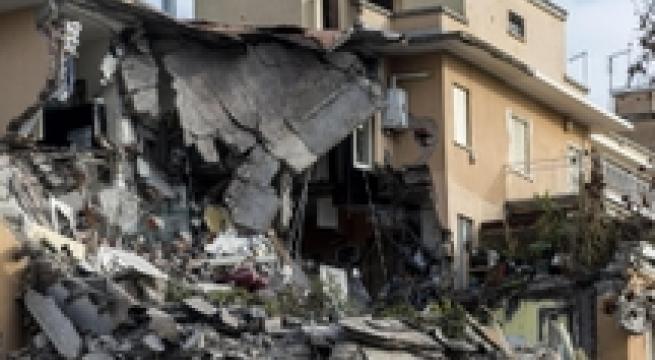 (by Michelle Ruelle). Rome, January 22 - The top three floors of a seven- story apartment building in a tony neighborhood along Rome's Tiber River collapsed early on Friday. No one was killed or injured because the building was evacuated after a resident heard creaking noises and raised the alarm. The building collapsed before the eyes of the 10 families who were evacuated, sources said. The incident may have been caused by renovations in one of the apartments, which may have wrought structural damage causing the top three floors of the 1939 building to cave in. "An investigation is underway," said Rome Police Chief Raffaele Clemente. "It seems that work was being done and we have to see what type of interaction there was between the work and the collapse". Traffic in the northern part of the city was tangled on Friday due to the collapse. Rome Commissioner Francesco Paolo Tronca thanked fire fighters, civil protection and public transport employees, calling their efforts "efficient teamwork that allowed residents to be updated in real-time, limiting inconvenience to a minimum". Tronca said the response by emergency services was "extremely positive" and the city would provide "all possible assistance" to the building's residents. Consumer association Codacons offered legal assistance to building residents and announced Friday that it will look into whether the work being done in the apartment was authorised or not. The Rome prosecutor's office said it will hire an expert consultant, possibly an engineer, to examine documentation regarding authorisation for the work that was taking place. The prosecutor's office will receive reports from fire fighters and police who assisted at the collapse and testimony from residents. Cristina D'Angelo, director of Rome's civil protection agency said the building's residents won't be able to move back in for a while. "It won't be quick," she said, adding that moving back in would depend on the results of a report to be filed by a commission that will include various entities including fire fighters, city government and civil protection. The woman who raised the alarm in the small hours of the morning, named only as Agea, said those who caused the collapse "must pay". "I didn't do anything, I just called emergency services," she said when asked how she felt about having saved lives.