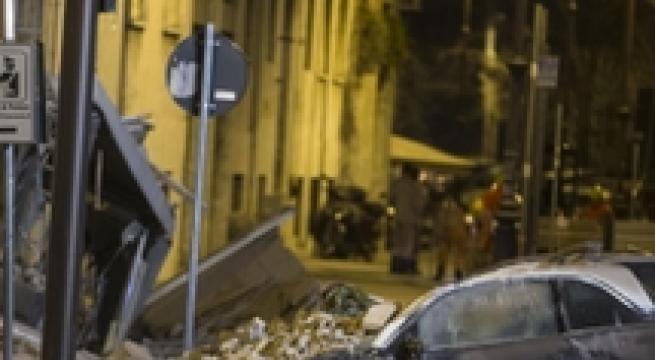 Rome, January 22 - Three floors of a Rome apartment building by the River Tiber collapsed early on Friday. No one was killed or injured as the building was evacuated after a resident heard strange noises and raised the alarm. The building collapsed before the eyes of 10 families who were evacuated, sources said. The incident may have been caused by building work in an apartment, which damaged the structure and caused the top three floors, the fifth, sixth and seventh, to cave in. Construction of the building was completed in 1939. "An investigation is under way," said Raffaele Clemente, the commander of Rome's municipal police. "It seems that work was being done and we have to see what type of interaction there was between the work and the collapse. We'll know something in the early afternoon". The woman who raised the alarm, Agea, said those who caused the collapse "must pay". "I didn't do anything, I just called the emergency services," she said when asked about how she felt about having saved lives. Traffic in the northern part of the city was tangled on Friday due to the collapse, which affected the building on Lungotevere Flaminio 70 that also houses the Teatro Olimpico, a popular local theatre currently hosting a Max Giusti show through January 24. "The Teatro Olimpico is compromised, it won't be open for a little while. We don't know if the structure is stable, but certainly we can't let spectators into a building like this," Clemente said. Building resident Massimo Goffredo, an architect who lives on the fourth and sixth floors, said partitions that held up sustaining walls were removed during the work in the apartment on the fifth floor. "I could see it from my window. The idea was of a large open space. I didn't know if they had shored it up or not," Goffredo said. "There were also enormous, really heavy cement pots (on the fifth floor), full of soil and water, which we had complained about several times. I think the weight of those contributed to the collapse," he said. Building resident Andrea Ciacchella, a civil engineer, said the floors collapsed "around 2 a.m." and that firefighters were about to go back in for a second inspection just prior. "Luckily they didn't go back in," Ciacchella said. "During the collapse I didn't see anything, there was a big cloud, it seemed like the Twin Towers," he said. One building resident said he also believes the work on the building's 5th floor is the cause of the collapse. "The building was remodeled two months ago, and the main risks were avoided," he said. "Something must have happened on the fifth floor, because the rest of the building held, and in fact the floor below is holding the weight of the rubble by itself," the resident said.