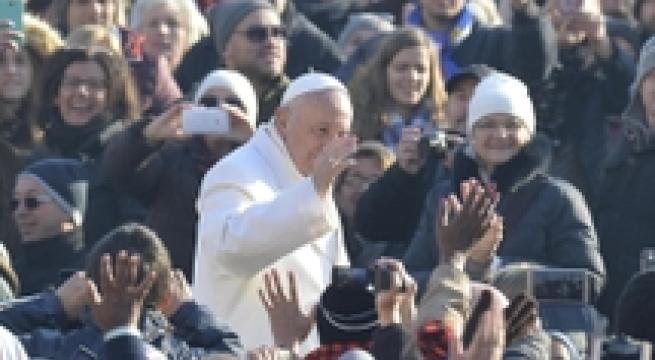 Vatican City, December 30 - The pope urged some 10,000 faithful gathered in St. Peter's Square on Wednesday to do what they can to help the victims of massive storms and flooding in North and South America as well as Britain. In what was his last general audience of 2015, the pontiff said he is praying "for the victims of the (weather) calamities that have stricken the United States, Great Britain, and South America - especially Paraguay - sadly causing victims, displacing many, and wreaking significant damages". "May brotherly solidarity come to their aid in their time of need," Francis said. Over 100,000 people have fled their homes due to flooding in Argentina, Brazil, Paraguay and Uruguay over the past week, while a massive storm system featuring blizzards and tornadoes has killed dozens in the central and southern United States and thousands of homes in the north of England have been evacuated due to severe flooding. The pontiff also spoke about children, saying they have much to teach us about the life of Jesus when he himself was a child. The little ones, he said, seek attention from adults because they need to feel safe. "They want our attention, not because they're arrogant but because they need to feel protected," Francis said. "They love to play, and playing with them means abandoning our own logic to enter into theirs - if we want (the child) to have fun, we need to understand what he likes, and not be selfish and do the things we like to do". In the same way, said Francis, the faithful are called on to relinquish logic in favor of the mysteries of religion. "In facing Jesus we are called on to abandon our claims to autonomy - and this is the problem in a nutshell: our claim to autonomy - and to welcome freedom in its true form instead," the leader of the Catholic church explained. "This consists in knowing who stands before us and in serving him. He, a child, is the son of God who has come to save us," Francis said. "He came among us to show us the face of the Father (God), which is rich in love and mercy". Francis also praised the attitude of parents and grandparents who lovingly observe children and their behavior.