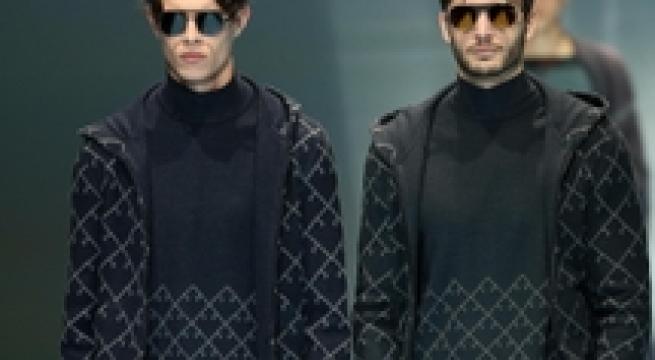 (by Elisa Cecchi). Rome, January 20 - Elegance is about being unforgettable rather than noticeable, according to Giorgio Armani, whose show closed the Milan men's wear fashion calendar for fall-winter 2016. Navy blue was the keystone of the collection, subtle and universally attractive like the Armani classics that have evolved over time at the designer's own pace. "I take risks every time," Armani said on the sidelines of the show Tuesday. Safeguarding creativity while designing garments that sell means "saying more, but not too much", according to the deacon of Italian fashion. Armani's fall silhouettes subtly redefined his vision of the male body, with alpaca and cashmere the canvas on which the designer crafted quiet variations of his brand of elegance. Fabrics were subjected to washing procedures as they were shaped to emphasize the figure, with boxy double-breasted jackets broadening shoulders and pants tighter at the calf to design the leg. Knit blazers hugged the torso, as did sheepskin jackets, coats and waistcoats worn on bare skin. Patterns were inspired by North Africa, with geometric motifs decorating cardigans, while the image of American novelist and painter William S. Burroughs wearing a crumpled suit and hat was part of Armani's journey for next fall. Armani's show wrapped up Milan's men's wear shows that have registered the elevation of loungewear as the star of collections that were widely genderless and richly decorated. Male and feminine were playfully intertwined in a juxtaposition of two perspectives giving men's wear new purpose and fluidity of expression. And if not many men next fall will be donning a red bow shirt under a chewing-gum pink cardigan, many might opt for the pants in classic wools tailored like sweats or trousers cut short to reveal feet clad in fur-lined sneakers. Men will also have the option of broadening their shoulders with boxy double-breasted jackets or of showing off their torsos in slim knits. Meanwhile coats will reign supreme, sending down jackets packing. Designed in a variety of styles to have the softness and comfort of robes or to convey an austere military vibe, they will be wardrobe staples. So will ties, which are resisting in formalwear despite the current genderless twist, and might be one of the few items in a man's wardrobe women will resist stealing next fall.