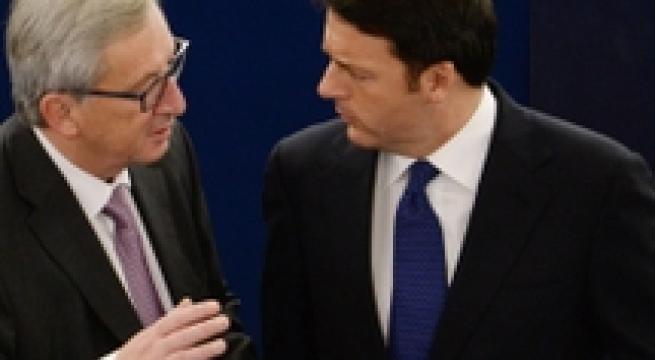 Rome, January 18 - Taking their cue from an unusually sharp exchange between Italian Premier Matteo Renzi and European Commission President Jean-Claude Juncker Friday, EU sources told ANSA anonymously Monday that Brussels has been having a communication problem with Rome. The sources said the EU didn't really know who their speaking partner was, prompting Foreign Minister Paolo Gentiloni to respond that "the interlocutor is the Italian government, in the fullness of its powers." And Germany's ambassador to Italy said that Berlin, often seen as the leader of the EU, needed Italy, adding that next week's meeting in Berlin between Renzi and German Chancellor Angela Merkel would clear up problems. Speaking on condition of anonymity, the European sources told ANSA there is concern at the highest EU levels over a lack of communication channels with Rome. Communication issues can turn into political problems, the sources said. European Commission President Juncker was and is Premier Renzi's friend and Italy's best ally, the sources said. Juncker and Renzi traded barbs Friday over economic flexibility clauses and migrants - and Renzi said Italy had made major structural reforms and was no longer being "remotely controlled" by Brussels. Juncker had lost his patience, the EU sources said. They went on to describe Italy's representative in Brussels, Stefano Sannino, as the best ambassador in the Belgian capital. What's missing, however, is continuous dialogue with experts and envoys on specific issues, such as the ones other European governments send in between major summits. This working method helps smooth rough edges long before leaders engage, the sources said. For example, France sent specialists to "negotiate for weeks" on its behalf over its national budget last fall. This communication gap has generated misunderstandings over Italy's four rescued banks, its troubled ILVA steelmaker, and the use of flexibility clauses among other issues, according to the sources. They went on to list two areas of EU concern over Italy: its protests after losing its only component on Juncker's cabinet, legal expert Carlo Zadra, earlier this month - Zadra quit and was replaced by a Briton after clashing with Cabinet Chief Martin Selmayr - and its blocking of a three-billion-euro fund for Syrian refugees in Turkey in spite of the fact that the Commission has "put it in writing" that the aid won't be included in deficit calculations. In response, Gentiloni said that "we have a continuous dialogue with the institutions, we have a foreign minister, interior, economy, Italy has a government in the fullness of its powers". "I have continuous dialogue with the institutions on problems, I think we have a government, a premier, a foreign minister, and interior minister, an economy minister, depending on the issues Italy has a government in the fullness of its powers," Gentiloni said. "We have to stick to the issues, go into the merits," he concluded. Italy "doesn't take part in pointless arguments", Gentiloni said earlier, on his way in to a council of EU foreign ministers Monday. "I consider some of the remarks that came from Brussels to be useless," Gentiloni said. "The situation in Europe is very delicate right now, both economically and on the migration front, and this delicate situation should be faced without the argumentative tones I heard coming from Brussels recently and which are, I repeat, pointless," the minister said. Also in response to the 'lack of interlocutor' charge Monday, EU foreign affairs chief Federica Mogherini said that "the interests of Italy and the EU coincide" and "the channels with the Italian government are there and have always been open, and also the exchanges with the Italian government are there, from what I see". Mogherini stressed the importance of having common goals on issues like flexibility and immigration, saying "in a year instruments have been introduced that before were not there, thanks to Italy and the Commission". Meanwhile Undersecretary for EU affairs Sandro Gozi said that "these (EU) statements are unusual, but we think they can be resolved with politics and by addressing the issues that we have put on the table, above all in the interests of that Europe which must change". He said "we have no personal problems with any of the members of the (European) Commission". Gozi said "if the anonymous sources wanted to restart dialogue, we welcome that. But Italy has its sticking points and has highlighted them, on what the EU must do to change". He said "right from the start the Renzi government made explicit what must be done in the EU" and therefore "we will continue to be constructive when we see that the Commission moves towards a new start, and we will continue to be critical in a constructive way when we see that there are delays and inertia". Germany's ambassador to Italy weighed into the flap, saying that "Germany needs Italy and recognises and appreciates its efforts to improve Europe and modernise its own country". Susanne Marianne Wasum-Rainer told Radio Radicale that "Rome and Berlin have common interests and problems, we are united and we have a great responsibility". She said "we are in favour of debate, that should not be taken forward in a polemical way, we need exchange". Next week's meeting in Berlin between Renzi and Merkel "is an important meeting between two close European partners, between two heads of government who esteem each other," Wasum-Rainer went on. "I am confident that the solutions for the problems that have been posed will be found," she said.