EC has no quarrel with Italy says Moscovici (2)

Let's get back to work, commissioner says in Davos 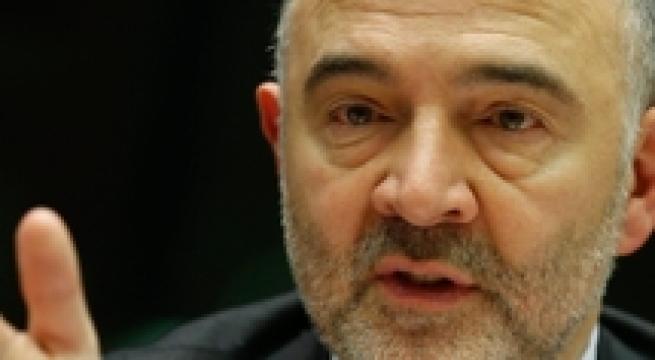 Davos, January 20 - EU Economic Commissioner Pierre Moscovici said Wednesday the European Commission has no quarrel with Italy. "The Commission can't be accused of acting against Italy - this is absolutely wrong," he said, adding he respects Italy, a founding member of the European Union, and Premier Matteo Renzi's reform drive. "There is no war (with Italy)," he said. "We must lower the tensions and work together with maximum objectivity," he said on the sidelines of the January 20-23 World Economic Forum in the Swiss town of Davos. Renzi said Tuesday Italy's regained stature as a major European player meant its critics and partners would simply have to "deal with it". And as Italy was set to tap a new envoy to Brussels to help address charges that the EU felt it was lacking a clear interlocutor, a key ally of German Chancellor Angela Merkel, European People's Party (EPP) caucus leader Manfred Weber, fed the row by saying Renzi was undermining the EU's credibility. European Commission President Jean-Claude Juncker, with whom Renzi traded barbs over migrants, economic flexibility, banks and State aid Friday, meanwhile denied accusations the EC had been slacking, saying that 11 of its new projects involved Italy. Amid the flap, the Milan bourse suffered again as banking stocks plunged but the head of bourse regulator CONSOB, Giuseppe Vegas, denied the notion that Italy was coming under specific speculative attack. As the controversy continued, government sources said Deputy Industry Minister Carlo Calenda will on Wednesday be tapped as Italy's new ambassador to the European Union, replacing Stefano Sannino. Calenda's appointment will be formalised at a cabinet meeting Wednesday night, they said. Calenda is the first career politician to be named as envoy to Brussels after a string of career diplomats. Renzi said on Facebook that Italy has regained its leadership role and that those who do not like it must "deal with it". The premier made the comments in the wake of heated exchanges Friday between Rome and Juncker, who has blasted Renzi for allegedly offending the EU executive. "Italy is increasingly open and attractive for international investment," Renzi said, "with major global companies that have decided to bank on our country, like Cisco, whose chiefs I met this morning. "(This is) the best answer to those who... would prefer to have us be weak and marginal, as often happened in the past, unfortunately. "They should deal with it. Italy is back, (and it's) more solid and more ambitious". Weber, ignoring Renzi's demand, ramped up the pressure after Juncker's unsually outspoken attack Friday. The EPP caucus leader said "Renzi is jeopardizing the credibility of Europe to the benefit of populism". Weber told the European Parliament "when we see that Italy is not willing to help Turkey unless there is a trade-off, all that hurts Europe, its strength and credibility". Italy is resisting a three-billion-euro package to help Turkey cope with Syrian migrants over concerns that national governments, and not the EU's common fund, may foot too much of the bill. Juncker, for his part, said governments that are critical of the EU executive should take a look at themselves first. "Without common action, a European policy on migration, Schengen will not survive," said Juncker, who on Friday blasted Renzi for allegedly offending the EU executive at "every opportunity". "Some governments are quick to attack Brussels, but they should look in the mirror, they are Brussels too", said the EC chief. Juncker told the European Parliament it was "not true" that the EC "has not been sufficiently active". He said "the investment plan is already in action, 40 billion euros have already been mobilised". Juncker stressed that "11 of the projects are in Italy". He added: "To those who ask me to resign for failing on the migrant crisis, I say I don't agree and one shouldn't lose heart but work together, united". Amid the fall-out from the Italy-EU row on the Milan bourse, where Monte dei Paschi di Siena hit a new low amid another widespread collapse of banking stock, CONSOB chief Vegas said that the recent strong declines in Italian bank shares were due to general market volatility rather than any concrete new developments. Banks that have come under the lens of the European Central Bank (ECB) for their bad loans portfolios continued to tumble on Tuesday. "It does not even make sense to concentrate on these banks, because the situation is general," Vegas said. He also ruled out a "specific" bourse attack on Italy. Meanwhile one of the points of contention between the EU and Italy, State aid to steelmaker ILVA, will be made the target of a probe on Wednesday, EU sources said. The probe will concern aid for production and not an environmental clean-up, they said. The undersecretary for European affairs, Sandro Gozi, said the government was having to fight growing disappointment in and indifference to the EU.