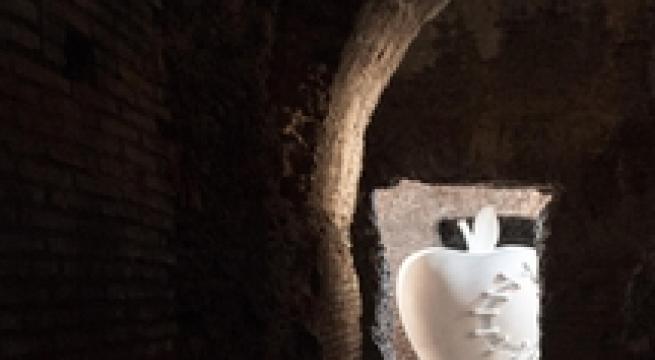 Rome, May 24 - The artist Michelangelo Pistoletto is returning to the Baths of Caracalla in Rome with his sculpture 'The Reintegrated Apple', to be exhibited through September 23. Pistoletto (b. 1933) is painter and art theorist who is acknowledged as one of the main representatives of Italy's Arte Povera modern art movement. His work mainly deals with the unification of art and everyday life, nature and artifice. The Reintegrated Apple is made out of a two-meter-high single block of white Carrara marble, and is shaped like an apple that someone has taken a large bit out of, with the bitten-off part subsequently "sewn" back on. In Rome, it stands inside the guard post from which the soldiers of Imperial Rome watched over the entrance of workers and goods headed for the Baths of Caracalla. "The Reintegrated Apple represents the entrance into a new era, in which the artificial and the natural worlds come together in a planetary equilibrium". "The bite is the sign of sin - as though to say that going against nature is already a sin," the artist went on. "We must solve this knot, bring science and technology closer once more, renew the natural world with the artificial one and find a new harmony in the juxtapositions". "I am only offering a vision," Pistoletto added. Asked whether or not the staples holding his apple together will withstand the test of time, he replied that "we must all become dressmakers, otherwise the bite will remain - as well as the regret of not having sewn up the wound". Pistoletto has made another Reintegrated Apple for Milan, but in a softer shape "resembling a heart", he said. The artist is returning to Caracalla after exhibiting 'The Third Paradise' there in 2012. That piece that remains in the archaeological site. The Third Paradise stems from a 2003 manifesto in which Pistoletto first described its meaning and drew its symbol - a new version of the mathematical infinity symbol with three circles instead of two, representing the two opposites of nature and artifice, with the middle circle as a conjunction of the two representing the generative womb of a new humanity.