Violence in name of God not religion pope says at synagogue 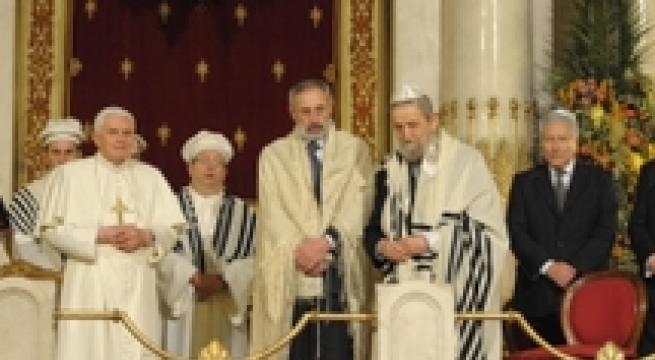 Vatican City, January 18 - Pope Francis said Sunday in a historic visit to the Great Synagogue of Rome that violence in the name of God contradicts all faiths. He also touched on the common roots of Judaism and Christianity, and stressed that the Holocaust must never be forgotten and that anti-Semitism must be fought wherever it crops up. War inflicts "deep wounds on humanity" and the violence of man against man "contradicts every religion worthy of that name, especially the three great monotheistic religions," the pope said to applause from Jewish and Catholic participants. "You are our elder brothers and sisters in the faith," Francis said. "We all belong to one family - the family of God" said the pope, adding that Christians must say "no to every form of anti-Semitism and condemn every injury, discrimination and persecution stemming from it". The pontiff went on to recall October 16, 1943, the day that SS troops stormed Rome's Jewish Ghetto and took 1,024 people, including 200 children, to concentration camps in Auschwitz. "Today I wish to remember them from the heart," Francis said. "Their suffering, their anguish, their tears must never be forgotten - and the past must be a lesson to us in the present and the future". Jewish-Italian Communities President Renzo Gattegna hailed the pope's speech, but added that more must be done to combat anti-Semitism. "I believe we need to come up with a common strategy to spread the message... of mutual friendship and brotherhood more widely," Gattegna said in his speech during the pope's visit. "Prejudices and expressions marked by offensive and wounding contempt are still at large". Francis's visit carried on a tradition started in April 1986 by Pope John Paul II, the first pontiff in history to visit the Jewish temple. This year's visit coincided with the annual Day of Judaism, a Christian-Jewish day of reflection established by the Catholic Church in Italy in 1989 and held each year on January 17, just prior to the annual Week of Prayer for Christian Unity held each year on January 18-25. The most recent visit by a pontiff to the Great Synagogue was by Pope Benedict XVI on January 17, 2010, and this year's visit will continue to highlight interfaith dialogue and cooperation.