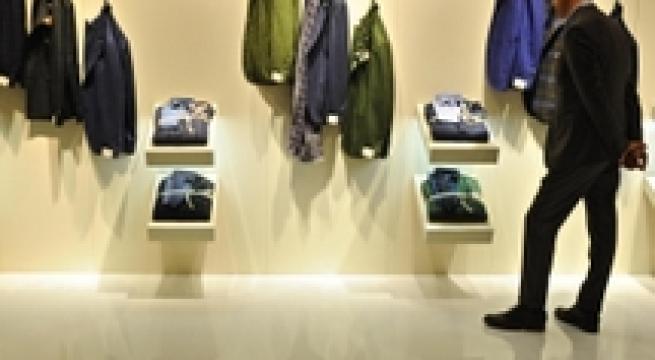 (by Elisa Cecchi). Rome, January 12 - The 89th edition of the Pitti Uomo men's wear trade fair is opening Tuesday through Friday in Florence with a Generation(s) theme on the end of the generational divide in fashion as different age groups contribute to define style. And the age-defying storyline for next fall-winter developed through architect Oliviero Baldini's set design and installations across the fair's location, the Fortezza da Basso, will debut high-tech wardrobe staples at this Pitti edition showcasing 1,205 brands including 531 from abroad and 226 new labels. In particular, outerwear will play the lead with coats in predominantly slim silhouettes, duffle coats, parkas and travel-friendly jackets in new waterproof and wrinkle-resistant fabrics. The last Pitti Uomo winter edition in January 2015 attracted 35,000 visitors and 24,000 buyers, including 8,660 foreign buyers. Korean designer Juun J, a master in overlapping silhouettes and intricate cutting, will be the guest star of men's wear with a fashion show on Wednesday at the Stazione Leopolda. Italy's Marco De Vincenzo, who co-owns his namesake brand with French luxury group LVMH and has been in the leather goods team at Fendi for the past 15 years, is the guest star of the women's wear fair Pitti W with a show Thursday at the Niccolini theater, which has reopened after two decades. Highlights of this edition will include Pitti Italics on new generations of designers supported by the Pitti Discovery Foundation, showcasing the winner of the 2015 men's wear Who's On Next? talent scouting competition Vittorio Branchizio and Florence's Federico Curradi. In addition, after the success of last season's Constellation Africa showcase, Pitti is promoting the project again together with the International Trade center's Ethical Fashon Initiative with collections made throughout the continent by Akjp, Ikiré Jones, Lukhanyo Mdinigi x Nicholas Coutts, U.Mi-1. Other events at Pitti include label Herno and illustrator Pierre-Louis Mascia launching a capsule collection of both men and women's wear. Italian artists Maurizio Cattelan and Pierpaolo Ferrari will be promoting their own brand of irreverence with a Toilet Paper for Seletti pop-up shop with a range of products. 'Make' will hail the resurgence of craft with exclusively handmade goods from international brands, highlighting new ideas and know-how in artisanal production. Tuscan jeans label Roy Roger's will be debuting a new capsule collection designed with top street style photographer Scott Schuman called The Sartorialist for Roy Roger's after his blog. British label Aquascutum (1851) will be returning to Pitti with its iconic men's wear and rainwear. Meanwhile, data released on the eve of the trade fair showed moderate growth for Italian men's wear in 2015 after a number of slow seasons. The Italy Fashion System (SMI) organization grouping fashion producers said turnover in 2015 reportedly grew 1.8% at nine billion euros, driven by exports which were estimated up 2.4% last year at just over 5.6 billion euros. Imports grew 7.6% for a total of 4 billion euros. Overall, European Union markets grew 3.3% while non-EU sales went up 0.9% with a significant growth, however, in the United States, up 16.2%, which became Italy's top market ahead of France and Germany. The positive trend is expected to continue in the first semester of 2016 with growth forecast at 2.2%. Based on data on spring-summer 2016 orders partially available in November, when SMI compiled the report, foreign markets are expected to shoot up 11.4% while domestic clients are forecast to grow 5.8%.