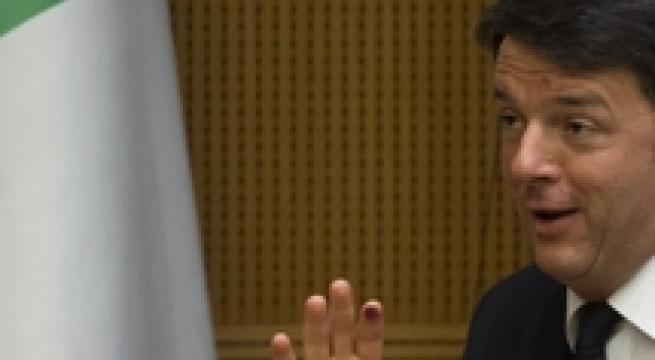 Rome, December 29 - Premier Matteo Renzi said at a year-end press conference Tuesday that Italy is no longer stagnating but growing. "They used to say Italy is in a permanent state of stagnation," Renzi said. "If we look at the data, we can see the plus sign growing again - we expected (GDP growth of) 0.7% and we're at 0.8%," he said. He went on to say that "if 2015 was the year of reform, 2016 will be the year of values". His government's 2016 budget law, he added, "puts money in schools, universities, culture, the civil service". This is going in the opposite direction of the EU, which may explode due to economic reasons because it has betrayed its principles - "which are not economic ones", Renzi said. He said a recent French election result showing first-round gains by the extreme-right Front National was not due to the November 13 Islamist terror attacks in Paris but to the economic crisis, which "feeds demagogic forces". Europe "is growing less because it has chosen a mistaken economic policy: Obama's policies have led America out of recession, European ones haven't. The right track has not been chosen, that of flexibility, growth and investments," the premier said. He also said his government's Italicum electoral reform bill is "a parliamentary masterpiece" and will provide political stability. The Italicum is designed to get rid of Italy's notoriously unstable governments by ensuring the next general election produces a clear winner. Renzi went on to say that unemployment has dropped to 11.5% but is still too high. "When you get stopped by a young man who says 'thank you, I got hired full-time, you realize the controversies over the Jobs Act brought more clarity not less in 2015 - there are more worker protections, not less," he said. The premier said until recently, Italy counted for little on the international stage but his government has changed that. "Italy did not count in foreign policy, we never even touched the ball - we were not invited to the Iran meetings," Renzi said. "Now we can sit at those tables - in Vienna over Syria, in Rome over Libya". Relations with the United States have never been better, he added. However "we have come to the realisation that part of the world also needs Russia" to solve international problems. In terms of the plight of asylum seekers fleeing war and Islamist fundamentalists in Africa and the Middle East, Renzi called for Afghanistan to be included among the countries whose citizens can be inserted on the lists of asylum seekers. He also said that while Italy can handle migrant arrivals on its own, Europe needs to come up with a unified asylum policy. "Italy can go it alone," he said. "A country of 60 million can relatively easily proceed to receive or expel over 150,000 arrivals this year, 170,000 last year - Italy does not have a numerical problem on which it needs help from Europe. The point is that we must have a unified framework, a European asylum policy". On the home front, the premier said his government is committed to passing an anti-homophobia law in 2016 and that the issue of stepchild adoptions will not be removed from a bill on civil unions now before parliament. Stepchild adoption "is a proposal we have backed since 2012", he said.