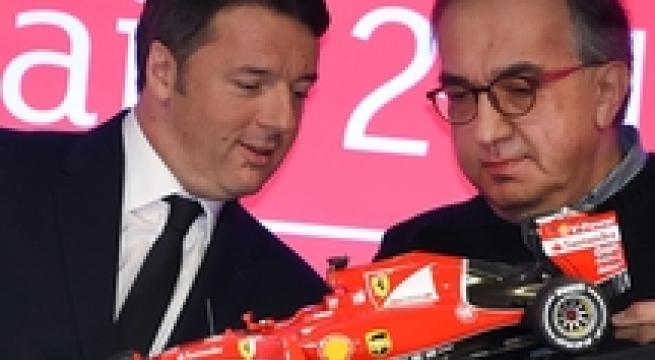 Milan, January 4 - Ferrari wobbled on its Milan bourse debut Monday despite a vote of confidence from Italian Premier Matteo Renzi who was on hand for the event with the Prancing Horse's top brass including President Sergio Marchionne. Marchionne, who said Ferrari would issue its first bonds in the first half of the year, was undaunted by the spotty share performance and vowed that the Formula One glamour team would regain its supremacy over the sport in 2016, capturing its first world title since Kimi Raikkonen in 2007. The Ferrari stock opened at 43 euros a share only to immediately lose ground and get suspended briefly after sliding under 42 euros a share. Trading resumed with Ferrari changing hands at 41.91 euros - against approximately 44 euros at the close on December 31 on the NYSE - with market cap of some 7.92 billion euros. By the close of trading the shares had clawed back further ground to end on 43.67 euros. Ferrari's Italian debut took place amid a general European stock market sell-off, mainly on negative Chinese industrial data but also to a lesser degree on tensions between Iran and Saudi Arabia. Some 264 billion euros in share value went up in smoke across the continent. Marchionne, who is CEO of Ferrari's parent company Fiat Chrysler Automobiles (FCA), said this is the year the luxury carmaker will regain its Formula 1 supremacy after just three victories last year, trailing behind the dominant Mercedes of Lewis Hamilton and Nico Rosberg. "The year of our return to the top has begun," he said, looking forward to Spanish testing soon ahead of the first grand priz in Melbourne on March 20. "The team is there...and we're not far from reaching the level of our competitors," he said. "The investments won't be lacking". Marchionne stressed that victory on the racetrack is essential to Ferrari. "We have invested a lot of financial resources - the work done in 2015 has laid an exceptional basis for a season of success in 2016," he said. "We must win right away....we must get back in the saddle immediately and reset to zero the difficulties of the past". Team Principal Maurizio Arrivabene said "we'll see where we are in the first tests in Barcelona. "Marchionne is the president and it's right for him to set the targets, and for me to reach them". FCA President John Elkann said the group "has a great future even without Ferrari". Renzi wished Ferrari well and said he hopes 2016 is the year Italy also picks up speed and overtakes the competition. "I would like for 2016 to be the year in which we stop making up for lost time and start running faster than the others - break a leg," he said. "Italy is finally present," he went on. "Globalization is our biggest ally and if we take to the field we're first in the world. A great country can experience negative moments but it can always restart," he said.