Govt to extend scope of Green Pass from mid October

Vaccine passport to be obligatory for public, private sectors 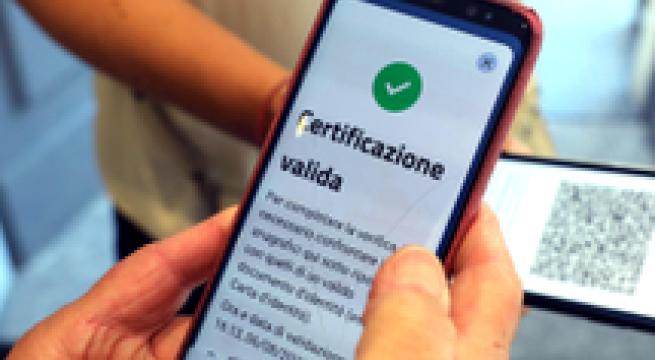 ROME, SEP 15 - Premier Mario Draghi's cabinet is set to approve a decree on Thursday further extending the scope of the Green Pass by making the COVID-19 vaccine passport obligatory for public and private sector workers from the middle of October, sources said Wednesday. There had been talk of the government making the Green Pass obligatory for the public sector first and then extending it to the private sector further down the line. But Regional Affairs Minister Mariastella Gelmini said Wednesday that the government was set to make the Green Pass "obligatory not just for public workers but also for those from the private sector. "Immunizing the overwhelming majority of the population is the only way to contain contagion," Gelmini added. "The government is ready to accelerate with the Green Pass. "We have taken a clear path. Tomorrow's cabinet meeting will definitely be an important moment". Draghi is set to have talks with Italy's big trade unons about the issue on Wednesday. The government had been expected to further extend the scope of the Green Pass last week, but there was a delay due to the reservations of Matteo Salvini's League and some technical issues that needed to be solved. The other parties in the ruling coalition have been pushing hard for the role of the Green Pass to be further amplified, saying this will reduce the risk of a new rise in COVID contagion making restrictions necessary. "The parties of the ruling majority must not betray the government's mission, which is to safeguard the country from the epidemic," said 5-Star Movement (M5S) leader and ex-premier Giuseppe Conte. "There is a political party that is messing around with its voters, does not have clear ideas and is not working in the interest of the country". Labour Minister Andrea Orlando of the centre-left Democratic Party (PD) said that "there will certainly be an extension of the use of the Green Pass". The green certificate, which shows that someone is vaccinated for the coronavirus, has recovered from it or has recently tested negative, is necessary to do many things in Italy, such travel abroad or on high-speed trains and on domestic flights, attend certain events and to be able to sit at a table inside bars and restaurants. Any adult that enters a school, including a parent, must have it and so must all higher education staff and students. Civil Service Minister Renato Brunetta said Friday that the Green Pass COVID-19 vaccine passport will be obligatory for all workers in Italy eventually. (ANSA).