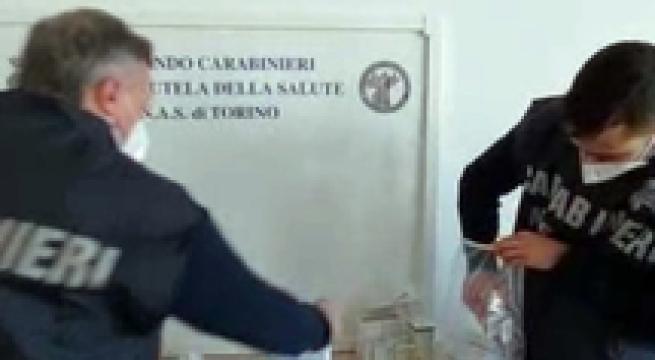 TURIN, JAN 20 - Police from Turin on Wednesday smashed a suspected doping ring that allegedly trafficked in illegal substances across Italy, supplying gyms where amateur body builders allegedly took the drugs.. The gang had connections abroad, police said. The police operation "dismantled a consolidated traffic in anabolic steroid and other doping substances", police said. The alleged gang was based at Pinerolo near Turin and had offshoots all over the country, in the provinces of Alessandria, Arezzo, Avellino, Brescia, Catania, Cuneo, Frosinone, Imperia, Reggio Calabria, Rimini, Rome, Salerno, Turin, Vercelli and Verona, police said. In the police op, dubbed David and Goliath, three people were arrested and a further 12 cited for distributing illicit substances. Some 26 people in all have been placed under investigation. Among the substances seized were oxandrolone, stanozolol and metenolone. In all, police seized 58 packs of drugs, 210 vials, 1,722 pills, 13 blister packs, and 51 inoculutaion devices whose use was quantified as about 15,000 euros per year by the three arrestees. Some of the body builders in the probe were competitive ones, police said. (ANSA).