Biggest ever 'Ndrangheta trial kicks off 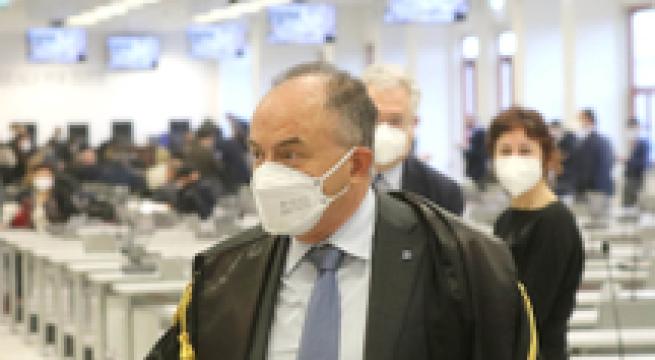 CATANZARO, JAN 13 - The biggest ever trial into Italy's most powerful mafia, the Calabria-based 'Ndrangheta, got under way at Lamezia Terme on Wednesday. The trial delves into the activities of the 'Ndrangheta clans in Vibo Valentia and their links to the political, institutional, economic and rogue Masonic worlds controlling all aspects of local life in Calabria. It is the biggest mafia trial in Italy since the so-called 'maxi-trial' of Cosa Nostra in Sicily from 1986 to 1992. The trial, which is expected to last around three years, has over 300 defendants who are facing over 400 charges. It is taking place in a converted call centre that has been turned into a 'bunker' in the industrial area of Lamezia Terme. Reporters from major global news outlets including The Times, the BBC, the Associated press, and Agence France Press, as well as major broadcasters, have flocked to the trial. But the filming of the proceedings has been banned. The prosecution is being led by Catanzaro Chief Prosecutor Nicola Gratteri, one of Italy's best-known anti-mafia investigators. Gratteri, 62, has been living in round-the-clock police protection for over 30 years. Talking to AFP ahead of the trial, Gratteri said it would aim to ease the "asphyxiating" hold of 'Ndrangheta on Calabrian life. On Wednesday Gratteri said "£succeeding in holding the trial here means that the Calabrians are not a people who leave things unfinished and that when we all sit at the same table it is possible to achieve complete works where a great efficiency is achieved. "It is important that the trial is taking place in Calabria. "It is a sign that people can trust us, that we can give answers. "This has also been proven by the increasing numbers of people who have reported ('Ndrangheta crimes". 'Ndrangheta has grown into Italy's most powerful and richest mafia thanks to its control of the European cocaine trade. Its tentacles have spread to the whole of Italy and all over the world. Italian police have gradually been digging behind the wall of silence or omerta' that for 'Ndrangheta is even more impenetrable than that of Sicily's Cosa Nostra. In January 2015 police arrested more than 160 people in the biggest-ever operation against a northern business arm of 'Ndrangheta. The op showed how far the one-time southern kidnapping gangs - long poor relations to Sicily's Cosa Nostra but now grown plump on cocaine cash - had infiltrated the economy of Italy's most affluent regions, especially the thriving economy of Reggio Emilia around Bologna. Other probes have shown 'Ndrangheta infiltration in the region around Milan, Lombardy, the region around Genoa, Liguria, and the region around Turin, Piedmont. In February 2014 a major Italian-FBI bust showed that 'Ndrangheta was muscling in on the drug operations of one of Cosa Nostra's historic five families in New York, the Gambinos. Before that, in July 2010, a massive police operation netted the head of the 'Ndrangheta and 300 others. Domenico Oppedisano, 80, anointed the equivalent of the 'boss of bosses' in Cosa Nostra at a Calabrian shrine to the Madonna a year previously, was caught along with their reputed head in Lombardy, Pino Neri. 'Ndrangheta is so secretive that the replacement for Oppedisano is still not known. 'Ndrangheta (from a Greek word meaning 'heroism' or 'virtue') once lived in the twin shadow of Cosa Nostra in Sicily and the Camorra in Naples. While those two syndicates, notably the Sicilians, were feeding off the transatlantic heroin trade through operations like the infamous 'French connection', 'Ndrangheta was only just emerging from its traditional stock-in-trade of kidnappings in the Calabrian highlands. It has since become a highly sophisticated global network with a chokehold on the European cocaine trade and control over swathes of its home turf where police fear to tread, Italian officials say. As well as being the richest, 'Ndrangheta is also regarded as the most impenetrable of Italy's mafias, with its close-knit family-based organisation outdoing the Sicilian mafia in its ability to defeat police efforts to turn members into State witnesses. The European law enforcement agency Europol has identified the 'Ndrangheta mafia as one of the "most threatening" organized crime groups on the global level, due to its "enormous financial might" and "immense corruptive power," with a presence in Germany, Spain, the Netherlands, France, Belgium, Switzerland, Canada, US, Colombia and Australia, where 'Ndrangheta turf wars have gained headlines. In Europe, 'Ndrangheta really only came into the public eye in 2007, when six clan members were gunned down on the midsummer Ferragosto holiday in the German city of Duisburg in a feud that began as a wedding spat in a small Calabrian coastal town, san Luca, in 1991. A string of 'Ndrangheta-linked businesses have been seized in the last few years all over northern Italy, and especially in the affluent Lombard belt around Milan, and a Lombardy regional councillor was placed under investigation for buying votes from transplanted clans. On the Italian Riviera, the town councils of Bordighera and Ventimiglia were dissolved for 'Ndrangheta infiltration in 2011 and 2012, the first non-Calabrian municipalities to be wound up because of such penetration. In Rome, the Calabrian Mob has laundered money in a string of plum properties, as attested to by recent seizures police say are only the tip of the iceberg. In November 2013 Grand Hotel Gianicolo, a former monastery converted into a four-star hotel for the Catholic Church's Jubilee in 2000, was seized from Calabrian businessmen linked to 'Ndrangheta. It is one of the swankiest properties on the hill, Gianicolo or Janiculum, that affords one of the most breathtaking views over Rome. Ten years ago a former Dolce Vita-era bar and restaurant on the storied Via Veneto, the Caffe' De Paris, turned out to be in the hands of the Calabrian Mob. More recently, gangsters involved in a hitherto-unknown Rome crime organisation that allegedly had fingers in a web of business and political operations were said to have links to other mafias including 'Ndrangheta. (ANSA).