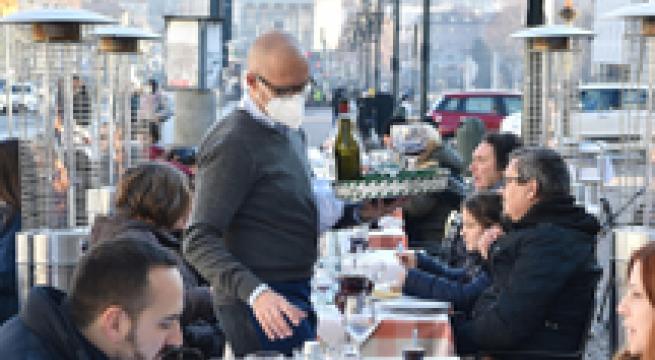 ROME, JAN 11 - Most of Italy went back to being a "yellow zone" on Monday as the nation reverted to a tiered system of restrictions based on each region's level of COVID-19 contagion risk after spending most of the Christmas holidays in lockdown. However, five regions, Calabria, Emilia Romagna, Lombardia, Sicily and Veneto, have been classified as orange zones this week and face tougher restrictions because they have higher infection rates. In yellow zones, shops are allowed to open and restaurants and bars can serve customers until 18:00, after which time they can only do takeaway and delivery services. In orange zones, shops can still operate but bars and restaurants can only do takeaway and delivery services. A night curfew kicking in at 10pm remains in force nationwide, as does a ban on the opening of cinemas, museums, swimming pools and gyms. Premier Giuseppe Conte's government is set to have talks with Italy's regional governors on Monday on the restrictions that will feature in a new decree that will be in force as of January 16. This is expected to include measures that would make it harder for people to get together in the evening and at night, such as stopping bars from offering takeaway services after 6pm, while allowing them to continue doing home deliveries. The decree could also see the creation of 'white zones' - regions where the risk of contagion is considered low and all businesses and activities are allowed. The new decree may also maintain the ban on moving between regions, except for work or health reasons or other situations of absolute need, that kicked in before Christmas. Several governors, meanwhile, have come out against a proposal made by the Higher Health Institute (ISS) for regions to automatically become red zones when they have over 250 contagions for every 250,000 inhabitants. In high-contagion risk red zones, all non-essential shops have to close in addition to bars and restaurants. Lombardy Governor Attilio Fontana said Monday that his region, which was the hardest hit during the first wave of the coronavirus, risks turning red again. "Last week the Rt (reproduction number) suddenly went up to 1.24," he told Sky TG24. "I hope these numbers go back down but if that does not happen, the risk of being red zone is more than concrete". (ANSA).