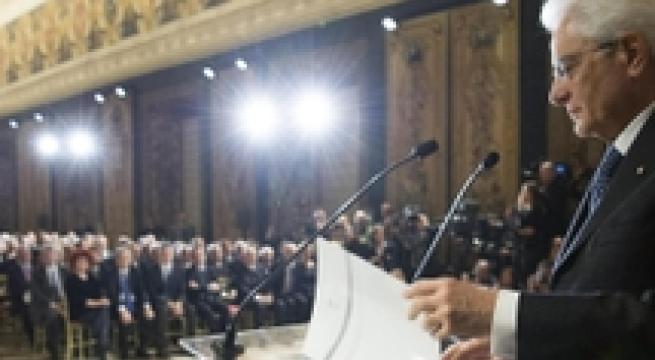 Rome, December 31 - President Sergio Mattarella is set to address the nation later on Thursday in what will be the first New Year's speech of his tenure, which began January 31. The president plans to speak for about 20 minutes from his residence within the Quirinal presidential palace in a live televised speech that will likely touch on his desire to "reconnect the country with its institutions" - as he told parliament in his first address as president at the beginning of 2015, in which he surprised lawmakers by reminding them of the founding values of the nation's Constitution, listing them one by one. Mattarella has taken symbolic steps to reconcile citizens with their scandal-plagued institutions since early in his presidency: in February he decreed the majestic and art-filled Quirinal Palace would be open to the public every day instead of just Sunday mornings, and declined to use anything but civilian flights for his official trips. In the course of his presidency Mattarella has been a steadfast supporter of the government's reform efforts, upholding its anti-austerity, anti-nationalist and pro-refugee stance abroad while also constantly reminding lawmakers on the home front that the right to full employment is enshrined in the Constitution, that they must focus on creating jobs for Italy's younger generations, and that corruption and the Mafia must be fought in all their variations. Mattarella became Italy's 12th president on January 31, when he won 665 votes from lawmakers from both houses of parliament and regional representatives in the fourth presidential ballot. The announcement was greeted by a standing ovation from all except the anti-establishment 5-Star Movement (M5S). With his anti-mafia credentials - he campaigned against the Mob after his brother Piersanti was killed by Cosa Nostra while serving as governor of Sicily - as well as a CV that includes work as a judge on Italy's Constitutional court and a reputation for integrity, Mattarella was hailed as a worthy choice to steer the nation during a time of far-reaching reform. "(He) is a Constitutional judge, and we are changing the Constitution," Renzi said at the time, referring to his revamp of Italy's slow, costly political machinery. "Mattarella is a defender of the Charter, which...means being able to defend it while promoting the transitional process in full compliance with the rules". Tonight, however, the president will likely not touch on ongoing debates but rather try to inspire citizens in the midst of a still-timid recession to feel they are a part of something - a country - that needs them in order to become a better place to live.