Loves music but 'sings like a donkey' says Francis 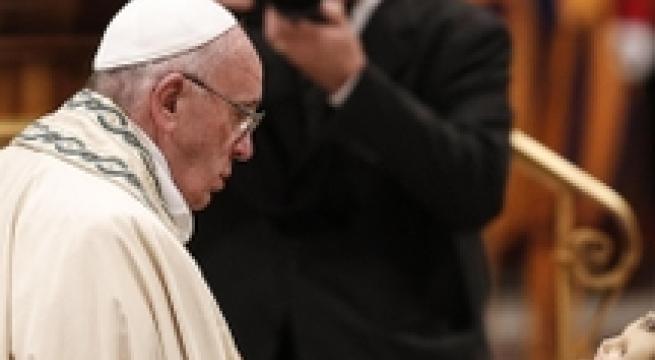 Vatican City, December 31 - Pope Francis said Thursday he sometimes gets angry but doesn't bite. Speaking to the Pueri Cantores international youth choral association, the pope said he loved music but sang like a donkey. He also said his mother played opera to the family when he was a small boy in Buenos Aires, where he wanted to be a butcher after admiring their handiwork. "I get angry, but I don't bite," Francis told the famous Catholic choir at an audience in the Vatican. "Sometimes I get angry, when someone does something that isn't right, but it helps me to stop and think about the times I have made other people angry," the pontiff said. The pontiff said that angry people suffer from an illness "as if they cleaned their teeth with vinegar every day". "Anger is poisonous, it poisons the soul," the pontiff told the Pueri Cantores. "Getting angry is something that not only harms others it harms yourself also," the pope added, "there are people who have a bitter soul, people who seem to live being always angry". "It seems like every morning they wash their teeth with vinegar to be so angry, like that it is an illness". "You can understand that if I don't like something I get a bit angry," Francis continued, "but the habit of getting angry, of shouting, of screaming at others is a poison". "When somebody is angry and screams, he wounds, like stabbing with a knife, this does not do good." Francis said he has always liked music, ever since his mother made his family listen to opera on the radio in Argentina. "I have had the pleasure of listening to singing since I was a little boy, I like music so much," the pontiff said. "Mamma on Saturday at 2 in the afternoon made us sit in front of the radio to listen to broadcasts of opera and as a child I discovered the pleasure of hearing singing". "I could never sing but one of my grandfathers, who was a carpenter, sang always while he worked," the pope said. "Singing educates the soul, it is good for the soul". "For instance when mamma wanted to make the baby sleep she sang a lullaby and the baby became peaceful and fell asleep". "Saint Augustine had a very beautiful expression speaking of the joy of Christian life, 'Sing and Walk'." "I like to hear people sing but if I sang I would sound like a donkey because I can't sing and I can't even speak well because I have a speech defect, in diction, but I really like to hear singing," the pontiff said. Francis said that he wanted to be a butcher when he was a little boy in Buenos Aires after admiring what he called their "art". "If I tell you the truth I'll make you laugh but I'm going to tell you the truth," Francis told his young visitors. "When I was little I used to go to the market, more often with my grandma than with my mother, to do the shopping," the pope recalled. "There were no supermarkets or TV back then. The market was in the street and there were places where they sold meat, vegetables and fish. "One day at the dinner table I was asked: what would you like to be when you grow up? "And do you know what I said? A butcher! Because the butcher who was in the market and took up his knife, cut the meat into pieces, it was an art, I liked to watch him". In other remarks to the young chorists, the pope said television and newspapers seem to "show only ugly things" despite there being "so many saintly people in the world," who are not shown on the small screen. "There is this attraction to evil, it seems that people like watching bad things more than beautiful things," which "have no ratings or advertising," the pontiff said. "If you want to get a journalistic or television rating show only ugly things. With good things people get bored," Francis commented. "Why don't you see on television the cloistered nuns who pray for us all the time? Jewels and things that make for vanity are more interesting." "Don't allow ourselves to be deceived," the pope said, "there are ugly things in the world but also holy things".