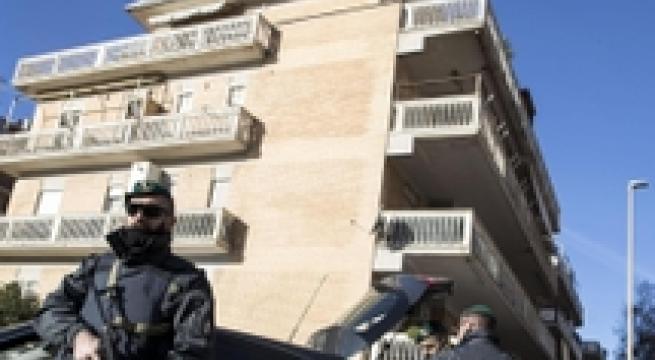 Rome, February 14 - A Roman lawyer was arrested Friday for helping ensure a 'pax mafiosa' between clans and gangs in the Roman coastal town of Ostia. The lawyer, Lucia Gargano, is accused of working with clan boss Salvatore Casamonica and a Lazio ultra leader killed in Rome last year, Fabrizio Piscitelli aka Diabolik, to keep the peace with other clans including the Spadas. The lawyer has been placed under house arrest. Another warrant has also been served on Salvatore Casamonica, who is already serving time for mafia offences. Both Casamonica and Gargano have been placed under a new investigation for eternal complicity in mafia association, judicial sources said. The Casamonicas and the Spadas are the main criminal groups in Ostia. The two clans, who are of Rom and Traveller origin, are also one of the biggest mafia organisations in Rome. Rome's Casamonica crime clan suffered another big blow last may when 22 people allegedly belonging to it were arrested in an operation by Carabinieri police. The operation aimed to break up an alleged criminal association to deal drugs in Rome's Via del Quadraro and Porta Furba districts that was estimated to have generated over 100,000 euros a month. "It is another blow to the clan. The institutions are present," said Rome Mayor Virginia Raggi. The Casamonicas, who have Roma and Traveller origins, have long been considered the most powerful mafia-style group in Rome. The clan is thought to have around 1,000 members and is involved in illegal activities ranging from loan sharking to drug trafficking, according to investigators. The clan has accumulation millions of euros that it has invested in villas, luxury cars and race horses, among other assets. There was a scandal in 2015 when one clan boss had a Godfather-like funeral complete with music from the iconic film and rose petals dropped onto a horse-drawn hearse from a helicopter. In July 2018 the gang suffered a major blow when 37 people were arrested in an operation targeting it. The clan was bust wide open, police said, thanks to the State's evidence of the sister-in-law of a boss, the partner of Massimiliano Casamonica, brother of clan chieftain Giuseppe Casamonica. Never accepted by the clan, she is now under police protection and her identity is being protected too, investigators said. The Spadas garnered headlines two years ago when a member headbutted and broke the nose of a RAI TV reporter probing their alleged support for the far-right CasaPound group in Ostia elections. Piscitelli alias Diabolik, the Lazio ultra leader with criminal convictions for drug pushing, was killed execution-style last August. The arrival of his coffin was greeted with several Fascist 'Roman' salutes at his funeral. Diabolik was killed in what appears to have been a professional hit with a shot to the back of his neck. Investigators are not ruling out any hypotheses but they are primarily focused on looking into the possibility that an organized-crime clan was behind the murder and not necessarily an Italian one. The 53-year-old had a criminal record for drugs trafficking and the finance police seized two million euros in assets from him in 2016.