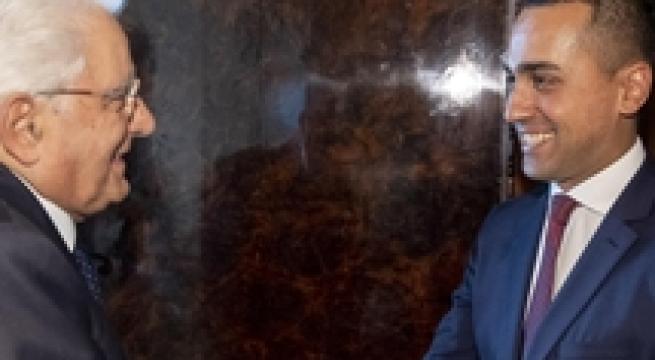 Rome, August 22 - The anti-establishment 5-Star Movement (M5S) "won't let the ship sink" and has started talks for a "solid" government majority, M5S leader Luigi Di Maio said Thursday after government consultations with President Sergio Mattarella. He did not specifically refer to centre-left democratic Party (PD) leader Nicola Zingaretti's offer earlier in the day to team up for a "turning-point" government until the end of the legislative term in 2023, or else go to elections. Di Maio said "all talks have been started to have a solid majority that wants to agree on the indicated points. We won't let the ship sink, or Italians pay". Hew declined to answer a question as to whether he was referring to the possible alliance with the PD. The 5-Star Movement brought to Mattarella 10 policy pledges that "are a priority for the Italians", Di Maio said. Among them, he said, was a law regulating conflicts of interest and another one reforming State broadcaster RAI. Also needed was a reform of the justice system and its self-governing body the CSM after a recent scandal. Cutting Italy's MPs and Senators from 945 to 600 is also a priority and only one parliamentary vote more is needed to make it happen, Di Maio said. The government crisis has hurt Italy blocking laws that are needed for millions of Italians, Di Maio said. Di Maio said that government "loyalty" had been undermined by a "unilateral" rift, referring to former partner and League leader Matteo Salvini who pulled the plug on the executive citing alleged inaction August 8. Di Maio said that "the citizens who voted on March 4 (2018) did so to change Italy not the Movement and I think that courage is not of those who flee but of those who try to the end to change things, also making mistakes with sacrifice and trying to do things". Earlier, Zingaretti said after consulting Mattarella that the PD told the head of State it was willing to try to form a majority with the M5S marking a break from the the policies enacted by the M5S with its former partners in the nationalist League party. "We manifested to the president our willingness to verify the formation of a different majority and the start of of a new political phase and a government marking political and programmatic discontinuity", Zingaretti said. Zingaretti said there should either be a "turning-point government" or a fresh general election after the League pulled the plug on its 14-month executive with the M5S. "There should not be a government at all costs: we need a turning-point government, alternative to the rightist parties, with a new, solid programme, an ample parliamentary base, which will restore hope to Italians. "If these conditions do not exist, the natural outcome of the crisis is an early election for which the PD is ready". He said the PD deemed it "useful" to try to set up a "turning-point government" for which "we have indicated the first non-negotiable principles," he said, first and foremost Italy's "por-European vocation". The five points to discuss with the M5S that Zingaretti laid out Wednesday are: "loyal membership of the European Union; full recognition of representative democracy, starting from the central role of parliament; development based on environmental sustainability, a change in the management of migrant flows, with Europe as a full protagonist; and a turning point on economic and social recipes, in a redistributive line, which will open a season of investments." In rumoured, informal talks with the M5S, the PD was also reported to have set three other conditions: the abolition of Salvini's security and migrants decrees; a "pre-accord" on a budget that must be approved with EU assent by the end of the year; and a stop to the M5S's cherished reduction of the number of MPs and Senators from 945 to 600. Another big stumbling block is that the M5S are insisting on caretaker Premier Giuseppe Conte keeping his job in a new administration, something which Zingaretti has vetoed. The possibility of naming a woman premier, possibly former justice minister Paola Severino or Constitutional Court Vice President Marta Cartabia, has been aired by some observers in a bid to meet Zingaretti's insistence on "discontinuity" from the M5S-League government. Nationalist League leader Salvini, for his part, called for fresh elections after the consultations with Mattarella, saying "today the path cannot be palace games, but only elections". But he added that he had "discovered" that some of the anti-establishment 5-Star Movement (M5S), his former ally, would be in favour of a "courageous" budget. He said that if M5S "noes becomes Yeses then I won't bear a grudge", pointing to the possibility of reforming that alliance. "If they want to get the country moving again we are ready to do so without prejudice, without looking back"." Italy cannot afford to waste time with a "government that quarrels", Salvini said referring to the possible M5S-PD government. Earlier, centre-right Forza Italia (FI) leader Silvio Berlusconi called for a centre-right government or elections, and far-right Brothers of Italy (FdI) leader Giorgia Meloni called for a fresh election running with the League and, possibly, with FI. Mattarella will brief the press at about eight o'clock. he is expected to say he wants a new government to be formed as quickly as possible.