Salvini 'desperate' says Di Maio, not opening/closing to anyone 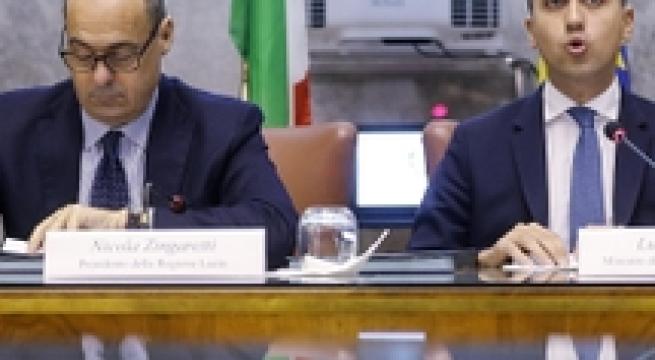 Rome, August 19 - The anti-establishment 5-Star Movement and the centre-left Democratic Party (PD) on Monday pondered a possible government alliance replacing the M5S's 14-month executive with the anti-migrant Euroskeptic League, on which League leader Matteo Salvini pulled the plug only to have second thoughts. Some within the PD, but not leader Nicola Zingaretti, have come out in favour of the new alliance despite big policy differences between the two groups. And there is also the possibility of the League resuming its alliance with the M5S. The musings came a day before a key address to the Senate by Premier Giuseppe Conte, in whom Deputy Premier and Interior Minister Salvini initially announced a no confidence vote which he is now reportedly uncertain about going through with. Among the possible scenarios is that Conte may go to President Sergio Mattarella to resign after making his speech, obviating the possible confidence vote. There is talk of Conte being given a second mandate to explore a possible M5S-PD coalition, or a possible renewed M5S-League coalition, spelling a Conte #2 government. But the PD on Monday said "speaking of a negotiation on the government, and dropping taboos on a second Conte government, is without foundation". M5S leader Luigi Di Maio, the other deputy premier as well as industry and labour minister, said Monday "I have seen that some people are already making proposals through the press on openings to other political forces," referring to the possible alliance with the PD. "In my view that is deeply wrong. We must trust to the president of the republic (Mattarella) and the institutional course that he will decide to map out". Di Maio said he had "full confidence" in Conte because the premier was an extremely correct man". Di Maio told his anti-establishment party that "the League hasn't yet filed a no confidence motion in the government and Salvini has raised the level of attack against us, he needs to talk about us in order to make the news, he's desperate. "I hope a debate opens in the League on the disaster Salvini has caused in a few days and in total autonomy". Di Maio accused Salvini of acting rashly, on the spur of the moment, saying he had sparked the crisis "on the beach, among the mojitos". Two M5S ministers on Monday denied that the M5S would make a government deal with two prominent PD members, ex-premier and former leader Matteo Renzi and former relations with parliament minister and ex-cabinet secretary Maria Elena Boschi, following the collapse of its alliance with Salvini's League. The M5S's minister for relations with parliament, Riccardo Fraccaro, described the notion as "the fake news of the summer which the League is spreading after bringing the government down. "I want to say this clearly, we will not do deals with Renzi and Boschi". The M5S's justice minister, Alfonso Bonafede, was just as emphatic. "The M5S will never sit down with Renzi and/or Boschi", he said. "The question is not a personal one, the country still needs a change which is totally incompatible with certain names. "It's a delicate moment for the country. "Enough already of fake news, let's be serious, please. "Thanks you," he said. The notion of an M5S-PD government has prompted Salvini to try to reverse the government crisis he caused by saying the alliance with the M5S had run its course because of too many 'Nos' from Di Maio's group including longstanding opposition to a French rail link. Salvini said Monday that there are dozens of MPs backing Renzi "that are terrorised" by the thought of holding elections. "They are inventing any excuse to create a new government," he said. "This is the only emergency." Salvini pulled the plug on Italy's first all-populist government on August 8. He then said parliament should first vote to cut 345 MPs and Senators and then Italy should go to the polls "immediately". Salvini said Renzi was afraid of a snap vote "because of the disasters he made" while premier. Salvini accused those who wanted to extend the legislative term by a deal between the PD and his former ally the M5S, and not call a snap election, of being antidemocratic and fascist, a charge frequently levelled at the League.