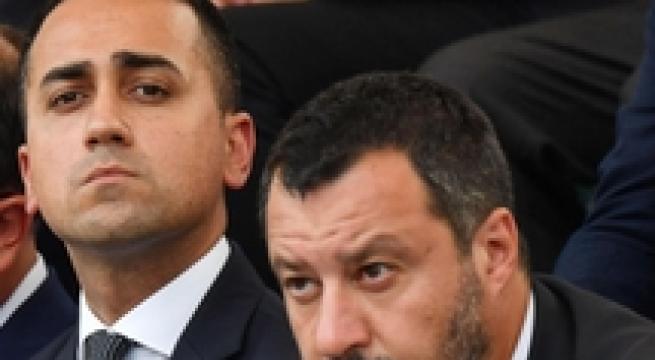 Rome, August 16 - The notion of anti-migrant Euroskeptic League leader and Deputy Premier Matteo Salvini trying to end the government crisis he triggered by offering the premiership to erstwhile partner and anti-establishment 5-Star Movement (M5S) leader and Deputy Premier Luigi Di Maio is "fake news", the M5S said Friday. The idea started circulating in centre-left opposition Democratic Party (PD) circles and was picked up by several news outlets. "What some press organs are reporting is totally false," the M5S said in a statement. "Furthermore, none of the dailies contacted official M5S sources with the aim of verifying this clamorous fake news. "They fell into someone's trap, but we're used to that by now. "We're not interested in posts, we're not interested in palace games". The M5S reiterated that cutting the number of Italy's MPs and Senators by 345 was "important" to them. Di Maio added that the parties who vote no confidence in Premier Giuseppe Conte next Tuesday will avoid cutting Mp numbers. As for the reports on alleged "posts and roles", he said that "only absurdities" had been reported. Salvini triggered the crisis in the 14-month, first all-populist government by saying the alliance with the M5S was over after a dramatic split in votes on a high-speed rail (TAV) link with France, and his League tabled a no confidence vote in Conte. Earlier PD House Whip Graziano Delrio said a German-style written government accord is needed between the PD and the M5S for a possible new government. "What is needed is a German-style accord, like that between the CDU and the SPD, something written down," said Delrio, former PD chairman. "We sit down, we negotiate, we analyse point by point for the good of the country, calling on the best minds, to give a different approach. "This country has thus far been obsessed by issues that have not brought anything good, like immigration. "I'm glad that (Premier Giuseppe) Conte has recognised this". Anti-migrant Euroskeptic League leader Matteo Salvini is "sorry but the damage is done" after pulling the plug on Italy's first all-populist government over policy differences with the M5S, M5S leader Luigi Di Maio said Sunday night. Citing persistent divisions over a high-speed rail link with France, Salvini's League filed a no confidence motion in Premier Conte on August 9, effectively ending the 14-month alliance with the M5S. Di Maio reiterated that Salvini had done so because the League was riding high in the opinion polls with 38%, compared to 17% in the March 2018 general election, whereas the M5S's support has slipped from 33% to 16%. Di Maio said the M5S, the biggest parliamentary group, would vote against the no confidence motion in Conte on August 20, spelling its probable failure since the second-biggest group, the centre-left opposition Democratic Party (PD), is also expected to vote against it. That would leave President Sergio Mattarella, the arbiter of the government crisis, in a quandary. He may try to appoint a PD-M5S caretaker government if those parties can iron out their own apparently irreconcilable policy differences. An M5S-PD alliance faces strong internal opposition from many in both paries. Di Maio and PD leader Nicola Zingaretti have thus far not said anything in public about such a possible tie-up, although former PD leader and ex-PD leader Matteo Renzi, still a force in the party, has come out in favour of it. On Friday Renzi said the PD should wait and see what the M5S does after Salvini "offered Di Maio everything" after allegedly becoming "really scared" of the government crisis he triggered. "Everything is great and also absurd," said Renzi on Facebook. "I've never seen a (government) crisis managed like this. If it weren't a serious thing it would be laughable! "Salvini feels his post slipping away and realises that only with power can he still have a (brief) future. The captain is really scared. And so he offers everything to Di Maio. Scenarios that put the soccer transfer market in the shade. "Now we'll see what the M5S will do: anything can really happen. "We have only one lodestar: respecting the institutions. Only that".