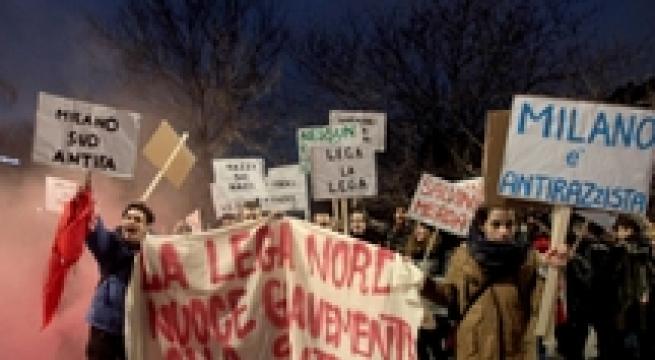 Milan, January 28 - The leader of France's far-right Front National (FN), Marine Le Pen, was on hand in Milan Thursday for a convention of Italy's rightwing, anti-immigrant Northern League (LN). Protesters earlier in the day left a pile of manure outside the convention center, along with a banner that read: "Racism, fascism, homophobia are a pile of sh**". Leftists later gathered to protest the rightwing convention and its anti-immigrant agenda. League chief Matteo Salvini later said such protesters are "the red Nazis, the friends of that Islam which hangs homosexuals and then take to the streets in the name of gay rights". He also said the crime of illegal immigration should stay on the books because it "works throughout half the world". The chief of Italy's Supreme Court made an impassioned speech in favor of the abolition of the crime of illegal immigration earlier in the day. Silvio Berlusconi's third government, of which the League was a junior member, made entering Italy illegally a crime in 2009.