'No conflict of interest, we saved 7,000 jobs' says premier 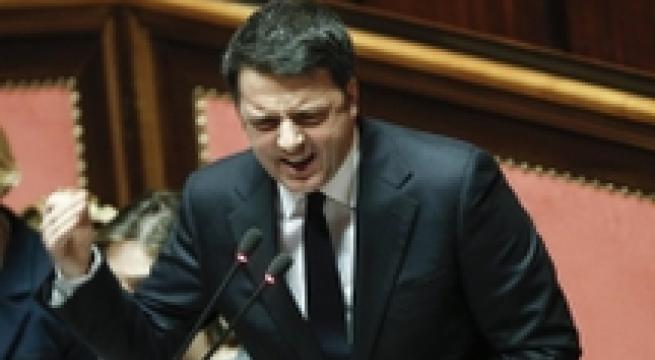 Rome, January 27 - Premier Matteo Renzi on Wednesday addressed the Senate ahead of two no-confidence motions filed by two opposition parties - Silvio Berlusconi's centre-right Forza Italia (FI) party and the anti-establishment, anti-euro 5-Star Movement. The motions were made over alleged conflicts of interest in the government's handling of one of four failed 'popolari' or cooperative banks that were rescued last year. Renzi began by saying he was "proud" of last year's reform of the 'popolari' banks, which should have overhauled 25 years ago. "If they had been done at the end of the 1990s...we would have averted the scenes of the last 15 years of connivance between the credit system and politics," he said in reference to several consecutive Berlusconi administrations. He went on to say that FI was "split and ever fewer" in number, and that the premise of a no-confidence motion over his government's handling of Banca Etruria is "totally disconnected from reality". "The motion says our decree on the popolari banks made mandatory the transformation and the listing of Banca Etruria," he said. "But of all the banks affected by the January decree, Banca Etruria was the only one already listed". Banca Etruria is being used to attack him, he said. "We are totally used to it, and we are not afraid," he said. He went on to tell FI Senators that the government's banks decree saved thousands of jobs. "It would be too easy for me to say the pot is calling the kettle black," he said. "There is no conflict of interest, but an attempt with that decree to save one million current account holders and 7,000 employees...we would never have destroyed pieces of the economy in the name of a political battle against government - Italy comes before political quarrels". An alleged conflict of interest for Reform Minister Maria Elena Boschi over the rescue of Banca Etruria, where her father was vice president, "does not exist", Renzi said. "This government put Banca Etruria under a commissioner as it did with other banks without having any concern for names and surnames," he told the Senate. "For us there are no friends or friends of friends," Renzi said. "In this country, those who err must pay and it is not up to you to decide who pays, it's up to the judges," he told lawmakers. He concluded by saying that "the centre-right left Italy in a worse state than it found it. We will leave it better than how we found it".