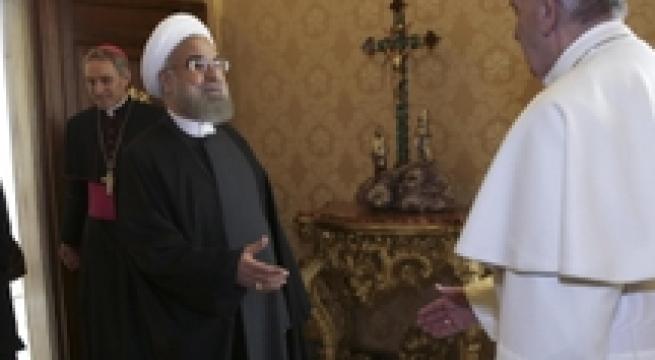 Vatican City, January 26 - Pope Francis's audience Tuesday with Iranian President Hassan Rouhani lasted about 40 minutes, the press pool reported. The president was accompanied by 12 people including one woman, the translator. The pope was flanked by a priests who acted as translator. The pope spoke in Italian and Rouhani in Farsi. Among the Iranian delegation was Foreign Minister Mohammad Javad Zarif, while Iran's ambassador to the Holy See was also present. Rouhani gave the pope a hand-made carpet from the holy city of Qom and an illuminated book. The pope gave the president a medal showing St Martin. "It shows St Martin cutting his cape," the pope said, "to cover the poor man. It's a sign of freely given brotherhood". Francis also gave Rouhani a copy of his ecological encyclical Laudato Si', in English and Arabic, there being no Farsi edition.