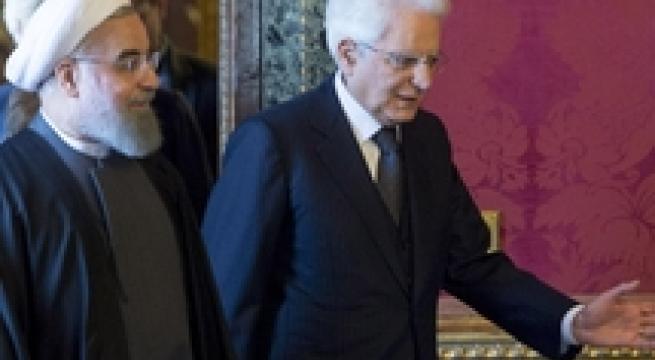 Rome, January 25 - Iranian President Hassan Rouhani tweeted shortly after arriving in Rome on a three-day visit Monday that he was "expecting to reinforce bilateral relations and explore opportunities" in talks with leaders including Premier Matteo Renzi. The tweet carried the hashtag #constructive commitment and was accompanied by a photo with Foreign Minister Paolo Gentiloni. Rouhani had a working lunch Monday with Italian President Sergio Mattarella. Also on hand were Foreign Minister Paolo Gentiloni and, on the Iranian side, a delegation of ministers including the foreign minister, the oil minister and the industry minister. Fighting international terror effectively takes international cohesion, Rouhani said. "Everyone must do their part to the utmost, without ambiguities," he told Mattarella at a meeting in the presidential palace. For example, non-Syrian combatants in Syria must be deprived of international support, Rouhani told Mattarella. He added that without a government, Libya will remain in the hands of human traffickers. All parties must agree on a representative government before the international community can engage in the north African country, Rouhani said. Both leaders agreed that in that case, the Libyan government-to-be must ask for international assistance. Italy and Iran are to sign multi-billion-euro agreements in the minerals sector, a member of the delegation from Tehran told Iranian agency Tasnim on Monday. "Contracts worth $5.4 billion are ready for investment with Italy in the mineral sector," said Iranian Trade Minister Mehdi Karbasian, who also heads up state-owned holding company Iranian Mines & Mining Industries Development & Renovation (IMIDRO). IMIDRO has over 50,000 employees and is active in steel, aluminium, copper, and cement production and in exploiting mineral deposits. As well, Transport Minister Graziano Delrio and his Iranian counterpart, Abbas Akhoundi signed a memorandum of understanding for Ferrovie dello Stato public railways to develop the railway system in Iran.